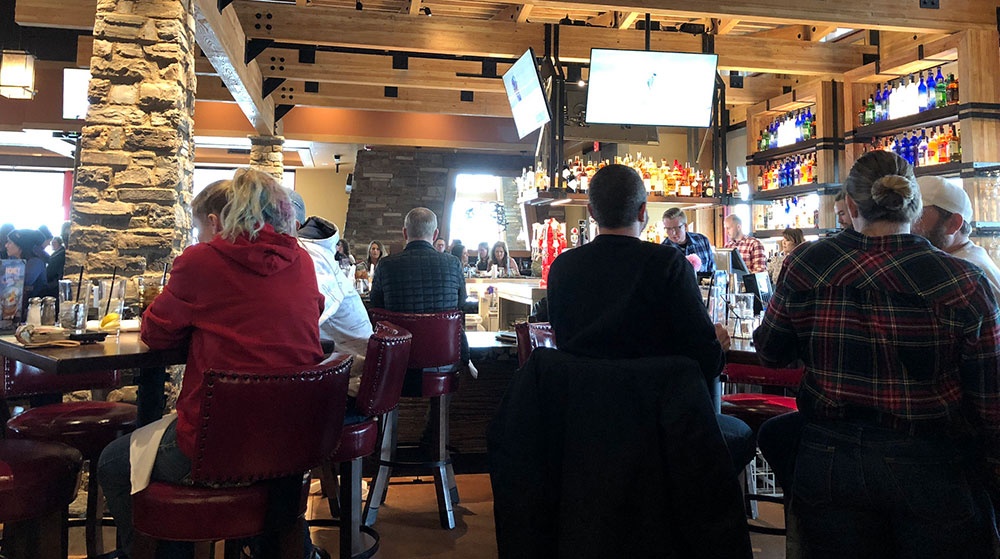 Lazy Dog is one of the newer restaurants to open in the Southlands Center and it is extremely popular. My experience, to be honest, has been mixed but we have friends who love it.

The first time we went, my husband and I decided to check it out and stop in for a quick drink. Although we got there around 4.30 it was extremely busy.  I did manage to snag a tall table in the bar while he parked the car. I’m not sure how long the wait was for dinner but there were people standing outside and milling around the large entrance.

While waiting for my husband to join me I noted the interior was quite nice. It has a log cabin feel inside with a large stone fireplace towards that back, pictures of rodeo cowboys on the walls and tree trunks acting as a partition wall near the front. There’s lots of windows which make it very bright inside. I guess overall I felt the restaurant section looked a little cafeteria like and not very warm and cozy but as the evening went on the ambiance started to show with their low mood lighting.

I really liked the bar area, it was very inviting. They have several different kinds of seating available there including tall tables, booths and seating around the bar. The actual bar was fully stocked with every king of liquor imaginable and the menu just as impressive. They serve some delicious locally crafted beers on tap as well as the usual selection of bottled beers. The best part on the drinks menu is the variety of cocktails. They have everything from a Moonshine and Peach long drink to mules, margaritas, mojitos, martinis, sangria, wine and brunch time cocktails.

The waitress came by fairly quickly to see what we wanted to drink and eat. We only wanted a drink at this point so we ordered some wine. The drinks were a little slow coming which was disappointing but they were busy. In fact, while we sat there, the bar grew busier and busier to the point where people where hovering in the bar area waiting to get a seat.  This wasn’t ideal as we felt very uncomfortable and crowded. People kept knocking our chair and we were getting quite frustrated.  I think the staff should have asked these people to wait in the entrance area at this point. Our wine finally came and it was delicious, we were ready for a drink that afternoon after being out and about running errands all day.

While we enjoyed our wine we noticed lots of delicious food being delivered to tables around us. One that caught our eye appeared to be Brussels sprouts. We checked the menu that the waitress left for us in case we changed our minds. Sure enough we found Brussels sprouts in the ‘small plates’ section of the menu. They were described as ‘lemon, garlic, butter, crispy capers and Romano cheese! Yep, we ordered some.  They were absolutely delicious and by the time we were down to the last one we both wished we’d ordered one each. We had dinner waiting for us at home so if it wasn’t for that we would have stayed for full dinner based on the delicious appetizer we’d just tasted.

We ordered one more glass of wine and enjoyed the rest of our time there watching all the delicious food wafting past and of course, a little people watching.

The second time we went wasn’t so good……

We were so enthusiastic about the place after our first visit that we thought it would be fun to meet our friends there for dinner. Kevin and I got there early to make sure we got a table and we did, we were seated at a generous 6 person booth right over between the bar and the kitchen. It was a great spot because if we stood up and looked over the back of the booth we could see the chefs hard at work in the shiny kitchen behind. All the yummy plates of food were close enough to us to see what a lot of the items on the menu looked like. The smell was amazing.

Our waitress came by fairly quickly and we explained we were waiting for a few others but we were happy to order a drink while we waited for them, as you do! We were there in time for happy hour so we ordered a couple of cocktails from the menu and also noted there were some happy hour appetizers on there. They had something called ‘Pow Pow Popcorn’. Sounded yummy so we ordered some to try.

The drinks were a little slow again as was the popcorn. We noted they were extremely busy again which was fine because we were tucked away on the opposite side of the entrance where everyone was waiting for a table but my guess is that the main area of the restaurant was pretty noisy.

Finally the drinks and the popcorn came. The drinks were delicious as was the popcorn BUT….. Kevin and I had about a small handful of popcorn each and it was gone!  What? it’s popcorn and it cost $3. It came in one of those cone shaped bowls that you often see french fries served in.  The dish was small in itself but if the entire thing had been filled with popcorn it wouldn’t have been so objectionable but it wasn’t! They had wadded some wax paper in the bottom for padding and then scooped in a small amount of popcorn on the top. We were really disappointed and very surprised.  We called over our waitress who sympathized with us and went back to check with the manager. We were sure they’d done this in error, why would they serve so little popcorn when it’s one of the cheapest things on the planet to buy and serve. The manager came over and explained that that was how they serve it. Our jaws dropped to the ground, we couldn’t believe it. We expressed our shock at what he said and he apologized of course and agreed to bring us another one. We were hoping that the second was a little more robust but nope - it was exactly the same. I cannot fathom why they do this, this could easily have been their signature item that they served for free like bread at the table or something similar. This felt like a slap in the face to us. They’d already made enough money on the two drinks we bought to more than cover a whole bucket of popcorn!

Our friends arrived and ordered drinks and we all then looked through the menu to see what we fancied for dinner. We all had something different and I ordered the ‘Fried Chicken Dinner’. For me, this is always a good test of a restaurant and the quality of its chefs. The fried chicken came with a hand-dipped buttermilk boneless chicken breast, red skin potato mash, housemate white gravy, spiced maple syrup, sautéed bacon and spinach, roasted sweet corn wheels.

The first impression of my dish was good. It was a huge plateful of food, as expected. The fried chicken itself was quite dry and the whole dish was very salty, especially the mashed potatoes. The flavors would have worked well together but nothing was particularly warm, let alone hot and the salt pretty much overwhelmed everything. I wasn’t impressed at all. It wasn’t at the standard of the Brussels sprouts we had a few weeks prior. Our friends were happy with their meals but my husband felt the same as me. He ordered the ‘Black and Blue’ pizza which came with cajun chicken breast, smoked bacon, mozzarella, caramelized onions, blue cheese, green onions and tomatoes. He enjoyed it but felt it was nothing to write home about.  I had a slice and agreed, it was ok but certainly not something we’d rush back to Lazy Dog for. We didn't unfortunately try any desserts but I will tell you that they looked yummy!

We haven’t been back since and with all the amazing restaurants available to us in the Smoky Hill area, we don’t feel compelled to give it another chance. The popcorn really annoyed us and is the main reason we won’t go back. If the food had been more impressive we may have gone back and just not ordered any more popcorn but we’re not even drawn back by the food. With the crowds that flock there and a so so atmosphere we just can’t bring ourselves to go back. It’s possible we’ll pop in for a drink sometime and maybe sit out on their patio but honestly we’ve been to much better bars and restaurants. This is a chain restaurant, and even though there’s plenty of chain restaurants we enjoy, we won’t be seeking out Lazy Dog restaurants on our travels.